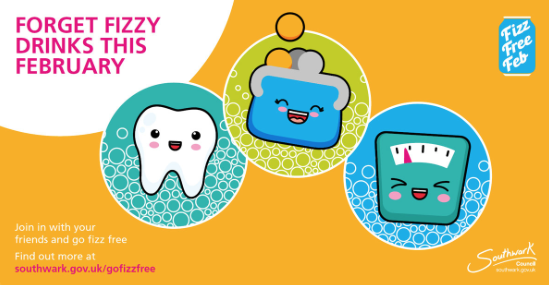 Fizz Free February: A Campaign to Cut Sugar with a Recipe that Might Just Cut Through

Lent was quite a big thing in my childhood and over the years I gave up everything, from crisps and sweetened breakfast cereals to, bizarrely, Dr Who. Sometimes my Lent restraints remained permanent, like sugar in my tea, while other times I’d completely failed by day two. But for a few short years it remained part of my calendar, part of who I was. It was a ‘pause and think’ period of time for me that would often lead to long-term behaviour change. And I was thinking about the impact it had on my life as I considered supporting a new health campaign - Fizz Free February.

Fizz Free February is a simple new campaign for children, young people and adults to cut out fizzy drinks for the 28 days of February. It’s the brainchild of Cllr Evelyn Akoto of Southwark Council, and with the help of Hugh Fearnley-Whittingstall and the Deputy Leader of the Labour Party Tom Watson the campaign has gained momentum.

As Chair of the Mayor of London’s Child Obesity Taskforce, I see first-hand the urgent need to help our children achieve a healthy weight. Nearly 40% of London’s Year Six pupils are overweight or obese, whilst the same measure for Reception class children is already at 22%. The Mayor is determined to do what he can to tackle this and our Taskforce is working with leaders, innovators and young people to unleash a transformation in our city, so that every child has the opportunity to have a healthy diet and an active lifestyle.

Campaigns like Fizz Free February play an important role in showing us all the big difference that small changes can make to our daily routine. But what evidence do I have that a new, relatively small, month-long campaign like this might work?  Well look no further than the successful campaigns that have come before

Dry January is a classic. People are motivated by the opportunity to change their routine and take stock of their lives, and do so, increasingly, in huge numbers with more than one million people taking part in 2019. While over a longer period of time, the incredible, and much deserved success of Park Run has captured the hearts, minds and feet of three million people across the country.

It’s clear those that succeed do so because there is a sense of group action, of community, connectedness and belonging. You become part of a new tribe and it feels good. The Movember campaign to raise awareness of men’s health and wellness has achieved this outstandingly.

Vital to any long-term success is the need for people to believe in the change they are making. That will trigger a series of small changes, or for others deliver one big change. It really needs to matter to them. They need to understand the issue, believe in the facts and be emotional enough about it to change their daily routine. I suspect that the relatively new campaign around Veganuary has these attributes to make it become a more mass campaign.

Finally, momentum is critical. Building mass movements, to tip a real change in lives, is hard. In researching this article, I discovered other examples of campaigns which sound fabulous. All address real, serious problems, but have not yet quite caught the zeitgeist of the NHS’s Stoptober, the pink ribbons of Breast Cancer Awareness Month, or the red ribbons in the build-up to AIDS/HIV day.

The organisers of Fizz Free February say that by going fizz free across the month you can save £438 if you stopped drinking one bottle of soft drink, per day, for a year.  They claim that drinking just one 330ml can of fizzy drink a day could add up to over a stone weight gain per year, and that tooth decay is the leading cause for hospitalisation among five to nine-year olds in the UK.  Three reasons why the Mayor of London and I - and the London Child Obesity Taskforce support the campaign.

I hope that Fizz Free February will catch the moment, create a sense of community and grow. It has a real fighting chance of raising awareness of the calories in sugared soft drinks and the tooth decay they can cause. An important outcome would be to cause the soft drinks suppliers to pause, reflect and change their offerings and options. It is a promising sign that some corporations are already on board I know that KFC has taken up the challenge and trialled sugared-fizz free restaurants in London across February to test the opportunities for doing something bigger. With the rise of social media, the knowledge, passion, determination and experience of children and young people, and their power to make change happen, there is every chance a nudge on this issue will become a big push in the right direction in the fight against childhood obesity. #gofizzfree.